I spent the last week automating the redhouse (the geothermal smart greenhouse).  Part of the automation includes giving the grow lights some smarts.  As pointed out in my last post, the grow light controller has a visible light sensor.  At the moment however, it seems my readings are inaccurate.  Full daylight on the sensor reads 1400 while it reads 919 during the night.  This is not ideal, but we can add some crude corrections to see if we are meeting the energy requirements that our plants need.

I measured the output of the grow lights using my smart phone’s light sensor.  I don’t know how accurate it is, but at about 12″ away from the lights, it reads about 30,000lux at full brightness.  That’s perfect.

Doing a little math, we can now figure out the difference in natural light to the light we are seeing on the sensor.  We know darkness on the sensor is 919 and full sun is 1400, so we’ll compensate.  All code from this point all will be python, but should be easy enough to convert to any language you want:

growLightRate will give us the percentage of brightness we need to achieve “full sun”.

Another thing we want to do is to not use the artificial light once we reach 100% of our daily needs.  We will save energy (and cost) by turning off the light when we don’t need it.  Here’s how I did it:

Lux is measured per second, so we will need the equivalent of 108mega-lux per day of energy.  The 3600 * 6 converts 6 hours (full day minimum requirement) to seconds.  We can adjust the number of hours according to the needs of our plants.  We can move it up to 8 for plants that need more light, or down to 4 for part-day plants.

Now that we have computed our daily needs, we need to keep a running total of how much we’ve produced:

We should run this code every 1 second.

Using the grow light as a heat source

We will also want to turn off the lights at night time, unless we are below our total energy needs.  But there are reasons to keep the light on at night.

Certain plants not only have different light needs, but also have darkness needs.  This requirement is called “photoperodism“.  Some plants need periods of darkness to “sleep”.  During “sleep”, these plants may initiate flowering among other things.  Tomatoes, cucumbers, roses and melons do not have any darkness requirements.  We could in theory provide light to these plants 24/7 which may help them to grow faster.

I don’t need the plants to grow faster, but the LEDs from the grow light do generate some heat.  This additional heat will help regulate the temperature at night and keep the air temperature warmer than it otherwise might be.  Because these lights are over our tomatoes, we don’t need to worry about causing harm.  I don’t recommend this for plants that require periods of darkness (short-day and long-day plants).  In my greenhouse I know the soil as well as the ambient air temperature.  I’ll use the temperature to determine if it’s cool enough that we will need the extra heat from the lights.  Using a library called “astral” we can also determine if it is night time or not.  Astral doesn’t tell us if it’s night, but it does tell us when solar sunset and sunrise are.

I’ve been fine tuning this logic for about a week.  Everything seems to be working.  I’ve only got one light at the moment over 3 of 9 tomato plants.  The plants under the light have much more growth than plants of a similar age and look healthier.  I’ve also added some variables to track how much natural vs artificial light I’m using and how close I am to my plant’s requirements.  This is my light production for today (from about 10:30am to 7:44pm)

Today has been overcast for most of the day.  Because of the clouds, 58% of my light has come from the grow lights.  Additionally, I’m 148% of my daily total right now.  My numbers reset at sunrise and the lights will be at 100% brightness for most of the night (it’s already cold enough to have the lights on).  Right before sunrise, I wouldn’t be surprised if I was over 200%.

Websockets are a pretty useful way of passing information to and from clients.  But how do you make them secure?  I’m documenting how I’m figuring it out as I go.  Let’s get started.

First, let’s get a simple autobahn server and client up and running.  This is straight from the asyncio example on github.  Running it with python server.py and python client.py respectively.

To make things secure, first we need to create some keys and certificates.  I am creating a self-signed certificate and key for both the server and the test client:

Next we need to add a few lines to our server and client.  For the server add:

and when we create the server, we will pass in the context.  Find the “loop.create_server” line and change it to:

The client is almost identical:

The first law of plant growth is light.  Typically this light comes from the sun at an incredible intensity of up to 100,000 lux (lm per square meter).  Different plants have different sunlight requirements.  Typically these are categorized as “full sun” or “partial sun” plants.  Full sun plants require at least 6 hours of direct sunlight per day (30,000 – 100,000lux).  Partial sun plants need about 3 – 6 hours.

Winters in the Oregon Portland area are dark.  So dark that humans suffer from the lack of light.  This condition is known as Seasonal Affective Disorder.  Most of this period is dominated by overcast clouds which reduces the light to about 1000 lux.  That’s 3% of the minimum  light required for full sun plants.  To grow food all year round, we are going to have to compensate for this lack of light.

There are many different types of artifical lighting.  The most power efficient of which are LEDs.  The problem with LEDs is that they typically have a very narrow range of light.  To make white, LED’s combine 3 diodes with some red, green and blue.  The human eye sees these three as white.  It cannot perceive the gaps in the spectrum that the LEDs do not transmit.

Other light sources cover a lot more of the light spectrum.

Given that lights light incandescent lights have a wider spectrum, why use anything else?  The answer is, plants don’t need all that light.  Plants use light in the blue and red spectrum and reflect the green and yellow spectra.  That means that any grow light that includes these wavelengths are wasting energy.

LEDs for growing do not have the green diodes.  This makes LEDs, which are already the most efficient artificial light source available even more efficient for growing.  While you can purchase may LED-based artificial light solutions, I set out to build my own in such a way that I can control the amount of light my plants get based on sunlight.  If there is full sun, I don’t need to activate the lights.  If there is less than full sun, I can adjust the brightness of the LEDs to compensate.

I found some grow LEDs on ebay for a decent price from the seller sungrowled.  These are 30W but I have also used the 50W variants.

To keep the LEDs cool, I picked up a 36 inch aluminum strip and mounted 6 LEDs evenly spaced on the surface.  I used thermal adhesive to mount them.

On the ends of the strip, I drilled a 3/8″ hole and attached something I could attach to some rope to hang.

I then wired up the LEDs in parallel.

The aluminum strip helps spread the heat, but probably will still get to hot.  To increase the surface area for cooling, I used the thermal adhesive to attach some aluminum heat sinks to the top of the strip opposite of the LEDs.  This unit will be passively cooled.

What’s nice about the Drok power supply, is that I can supply constant voltage AND constant current.  LEDs have an upward sloping current draw relative to the forward voltage.  This means if you oversupply voltage, it’ll draw enough current to burn out. 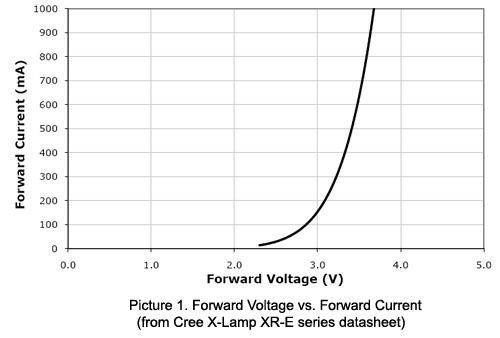 Typical ways to drive LEDs include supplying a constant current, so that you can safely over drive the voltage, a resistor which will also limit the current, or constant voltage.  If you never go over the volts, the current draw will be just fine.  With this Drok boost converter, I have POTs that I can dial both.  I started at 24V and slowly adjusted both the current and volt POTs until I read about 170 Watts on the kill-o-watt.  Waddayaknow!  It worked!  It’s really… really bright too!

To finish off the light power, I put both the Drok buck boost converter, the AC-DC power supply, a couple fans, and  Drok buck 12 power supply in a nice case and mounted it in the redhouse.

At the moment, our lights are dumb.  They turn on and off manually and do not care about sun.  We need a smart controller.  I used the Particle Photon, which is a cheap wifi-enabled MCU that’s only $20.  I’ve been using the photon a lot lately.  This is actually the third unit inside the Redhouse and I plan on using at least one more.  We also need a sensor to measure how much light we are getting from the sun.  I had an SI1145 sensor breakout from adafruit laying around so I used that.

To control the LED brightness, I use a MOSFET.  By modifying the signal’s pulse width on the MOSFET gate, I can control the voltage allowed to pass through the MOSFET.  I wired everything up, wrote a few lines of code using the Particle builder and this is what came out:

The light sensor won’t work without light, so I need a case with a clear lid.  I found a waterproof project case on amazon that had a clear lid.  Perfect.  I installed the board in the case, wired it up, and installed it in the Redhouse.

How much did this cost me?  I try not to think about it, because I’m not building to necessarily save (although, I believe I am).  Here’s a list of components and their costs:

I think I saved some bucks and get more features.  Here’s the final product growing some nice Roma variety tomatoes:

Do they work?  Early indications suggest they do.  The plants under the light look more lively.  One plant NOT under the light has a livelier branch under the light where the other branches are not as lively.  So, pending future observation, I conclude, it works.  I only have 2 more of these to make :).

Adventures and the technology all around us